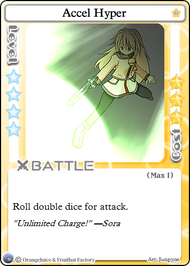 Accel Hyper is a 4-star battle card that gives the player the opportunity to deal a substantial amount of damage to an opponent. Upon activation, the player will be given 2 dice for their attack during the battle phase instead of 1.

Accel Hyper is a rather pricey battle card that can either be extremely rewarding or incredibly underwhelming depending on the result. In a sense, the card is a purely attack-based

Accelerator, and as such, its uses and results are somewhat the same. The extra attack power can be used to take down a low HP character or a high-profile target, such as an opponent with lots of stars. Accel Hyper card can be useful for any character, however, the higher the player's attack stat before the card's activation, the better results the card will yield. As to be expected, bully characters such as Star Breaker will benefit greatly from this card, rolling somewhere around a 3 or 4 even at the lowest. Low attack characters such as Fernet or Kyoko can still benefit, though, especially if the opponent is at low HP. Since the card can only be used during the late game (unless

Price of Power is played), the trade-off of 30 stars to take down a boss or to KO another player is generally worth the cost, gaining back more stars than the initially player paid. Accel Hyper can work both alone or by combining it with other cards for a powerful combo. Event cards such as

Little War and an opponent activated

Final Battle pair well with Accel Hyper, granting its user more turns to ensure a boss KO or a player KO. For maximum output, hyper cards such as

Blazing! can become almost unsurvivable and

Accelerator can give the player a massive 4 dice to eviscerate the opposing player.

Like most dice manipulating cards, Accel Hyper suffers from unreliability and a high cost. The player will need to KO the opponent and get at least 30 stars back to make the card worth using. The primary risk, however, is the results: A character with no attack buffs can roll anything from a 2 to a 12, characters with +2 ATK a 4 to 14, and characters with -1 ATK a 1 to 11. This is a huge discrepancy in results that can result in the card failing miserably, especially if the player rolls 3 or lower for both dice. Unsurprisingly, snake eyes is the worst-case scenario, and the fact that each dice can give its own result can be disappointing if one dice is 5 and the other is 1. Likewise if the player fails to KO the opponent, they will not have two dice to defend, resulting in a higher risk of being KO'd. There are also times when Accel Hyper should not be used, such as when KOing the boss will yield very few stars or when an opponent is low on stars. One character, in particular, to be wary of when using this card is Alte, as her

Self-Destruct Hyper will make quick work of the player, making them lose even more stars and gain a total of 0 from Alte. Another example is Miusaki. If she happens to be above 2 HP, it's useless to use the card, as she will take no more than 2 damage.