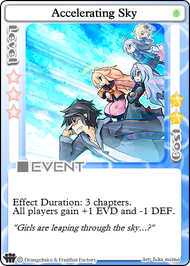 Accelerating Sky is a 3-star event card that increased the evasion of all players while decreasing their defense. The effect lasts for three chapters.

Accelerating Sky can serve as a helpful buff or a detrimental debuff depending on the character. It is highly beneficial to evasive attackers such as Sora and Suguri, increasing their already good evasion while inhibiting their opponent's ability to block incoming damage. Kae in particular becomes extremely powerful while Accelerating Sky is in effect, as it boosts her ATK as well as debuffing her opponents. Evasive characters in general can still make good use of it despite the high star cost with the help of

Play of the Gods or

President's Privilege. Aru (Scramble) can give the card away to opponents with

Santa's Job in hopes that they might play it for her. While character with more neutral defensive stats like Kai or QP will be at a greater risk of taking damage, they will also be able to dodge smaller hits more effectively.

Accelerating Sky can be very dangerous for characters that rely on defense over evasion. Bulky attackers like Marc and tanks like Fernet will find their defenses reduced in exchange for a stat that they cannot use effectively. Tequila and Kyoko are the most affected by this due to their extremely poor EVD and inability to dodge respectively. Characters that rely on their high HP for survival like Marie Poppo and Flying Castle will also find themselves in trouble if this card is played, as they tend to have low defensive stats in general.