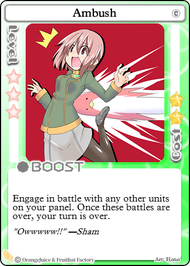 Engage in battle with another player or players on your panel. Once these battles are over, your turn is over.
Level
3 ☆
Cost
20 ★
Limit
3 per Deck
Deck Points 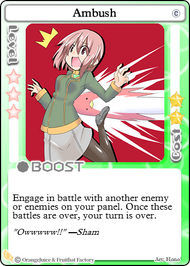 Engage in battle with another enemy or enemies on your panel. Once these battles are over, your turn is over.
Level
3 ☆
Cost
20 ★
Limit
3 per Deck
Deck Points

Ambush is a 3-star boost card that causes the user to attack all opponents standing on the same panel as them. Once the battles have completed, their turn then ends.

Due to the limited range of this card, Ambush will only work when an opponent is standing in the same panel as the player. This most often happens when the player is attacked by an opponent or if a recently KO'd player has just revived on their next round. Because of this, Ambush is a great card to use against opponent with low recovery like Saki or auto-revive passives like Shifu Robot. After KOing them once, they have a high chance of reviving, allowing the player to use Ambush to challenge them again immediately. Ambush also pairs nicely with

Party Time. If an opponent uses

Party Time, the player will have an opportunity to catch at least one opponent with Ambush. In a pinch, even a character poor at fighting like Aru can use Ambush to skip their turn if they would otherwise move into harm's way.

Since Ambush is made for offensive characters, characters like Marie Poppo who are terrible in battle will not be able to get much use out of this card. Even offensive characters can be punished for bringing it. If a target survives an attack, they can use Ambush to potentially KO the the player in response. Tanky characters like Fernet can use Ambush to force a battle now to avoid more in the future by getting behind the player. When multiple players are standing on the same tile, using this card will have the user fought them all one by one, increasing the potential payoff but also the risk from consecutive battles.