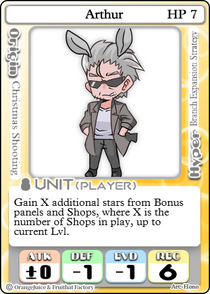 Rbit Hobby Shops on the field, lest they give him even more stars. However, he is not without his flaws. Despite being bulky, Arthur's neutral ATK is less threatening, so he is prone to being fought. He is also relying on -1 DEF and -1 EVD, which means that while he can survive a single hit well, he falters when it comes to repeated fights without cards like

Dinner. On top of that, after he is KO'd, he is forced to wait out his 6 REC before he is able to get back up. He is also vulnerable to having his shops being used for extra card draw in order to get extremely powerful cards, like Marie Poppo using them to gain

Ubiquitous. Make no mistake, however -- Arthur is still an effective character for players that would rather be passive. 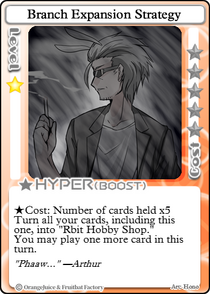 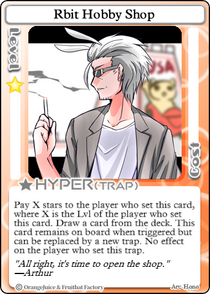 Arthur is a passive character who wants to set up his first three shops as fast as possible, as long as they are on a panel he wants, and use any other hypers when he doesn't have a good hand. He wants to aim for panels that players are forced to go over, particularly Home panels. After he has his shops set up, he wants to aim for star panels to build up a star lead. 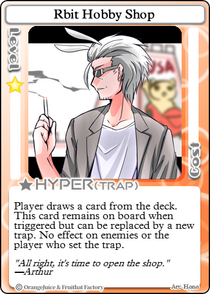 Player draws a card from the deck. This card remains on board when triggered but can be replaced by a new trap. No effect on enemies or the player who set the trap.
Hyper Info
Effect Type
Trap
Level
1
Cost
0 ★
Symbol
[[File:|30px|link=]]
Illustrator
Hono
"All right, it's time to open the shop." ―Arthur

In Co-op mode, Arthur's stats and passive do not change.

Arthur's secondary Hyper, Rbit Hobby Shop, has a slightly different effect in Co-op. The Hyper has no effect on enemies, and no stars are gained or lost when triggering this Hyper. (In all other aspects, this Hyper functions similarly to its Normal mode counterpart.)

Arthur's passive and Hyper are unchanged in Bounty Hunt mode.

Arthur's base stats give him 44 starting stars and a discount of -10% at shops.

To unlock Arthur as a playable character, along with his unit card and Hyper cards as binder collectibles: