< Aru
Edit
Present for You 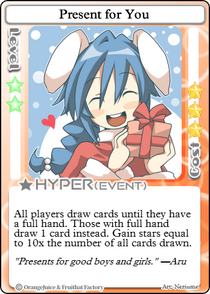 All players draw cards until they have a full hand. Those with full hand draw 1 card instead. Gain stars equal to 10x the number of all cards drawn.
Hyper Info
Effect Type
Event
Level
2
Cost
30 ★
Symbol
[[File:|30px|link=]]
Illustrator
Hono
"Presents for good boys and girls." -Aru

The number of cards the player will draw is determined after Present for You is removed from the hand, meaning the Hyper itself is not counted as taking up a spot in the hand.

Present for You is one of the fastest star-collecting Hypers if activated at the opportune moment. The Hyper grants more stars the fewer cards everyone has in their possession, thus it is wise to hold onto the Hyper to maximize the total star gains. With the high price of 30 stars it is advisable to hold onto the Hyper until the player can gain at least 50 stars from it to pay off the card and gain over half the price. It should also be noted that often times the first use will be the most efficient, as other players may horde their cards to prevent the Hyper's use again, or it may take very long for players to use their acquired cards. If timed properly, the maximum possible amount of stars awarded by Present for You is 130, which is almost triple the amount Marie Poppo can steal with

Ubiquitous. Also since Aru herself can hold 4 cards at a time, if the hyper is used as the only card in her hand, she gains a profit of 40 stars at a minimum and gains 4 new cards as a result, which can be advantageous.

The main downside to the Hyper is that it is beneficial to other players as well as the user. The opponent will likely draw cards enabling them to go on the offense and draw a few of their own Hyper cards. Characters such as Peat and Sweet Breaker will benefit from the increased number of cards held if they draw their Hyper. Marie Poppo can also benefit if she draws her Hyper as well, as she will be able to steal a large amount of the newly gained stars, with little chance of Aru being able to fight her for them due to her low stats. A secondary downside to the Hyper is also that it does not work as well on Boards where the Charity effect is active, as it will supply the players with cards and diminish the returns of the Present for You.