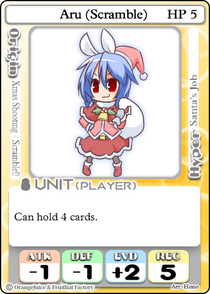 Aru (Scramble) (アル (スクランブル) Aru (Sukuranburu)) is one of the bonus characters in 100% Orange Juice!, unlocked by owning the game Xmas Shooting - Scramble!! on Steam.

Aru (Scramble) is the counterpart to Aru, sporting the same stats and the passive of being able to hold 4 cards. As such, she fills the same role of being a star-collector while avoiding combat. She possesses a +2 EVD stat together with Suguri and Suguri (Ver.2), allowing her to avert most damage. She also has the ability to hold 4 cards, which gives her more possibilities to not be KOed by enemy encounters. Finally, her Hyper is a considerable idle star gaining method which increases throughout the game, while also giving her some security against combat-heavy characters if luck plays on the player's side.

Her main disadvantage is her low combat stats other than Evade. Due to a low ATK stat, Aru (Scramble) will most of the time retaliate with low damage, and a low DEF stat makes her more vulnerable against high attack rolls. Having a high EVD stat will incite players to evade, but a failed roll will cause high damage or a KO. Rounding off, despite her hyper being a very good star gaining method, it relies on giving away cards that can potentially benefit her enemies.

Pros
+ Tied for the second highest EVD stat with Suguri, Suguri (Ver.2), Suguri (46 Billion Years), Tsih and Aru
+ Hyper can be used to prevent player encounters
+ Hyper helps her accumulate stars through the game
+ Good HP to potentially survive in case defense is preferred
+ Passive allows her to hold 4 cards