100% Orange Juice Wiki
Register
Don't have an account?
Sign In
Advertisement
in: Level 2 cards, Trap cards, Base pack,
and 3 more 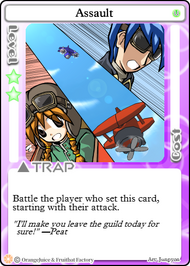 Assault is a collectible Trap card that can be acquired from the Base Pack.

Assault is a trap designed to help offensive characters find fights and get KOs. Characters like Kai and Star Breaker can easily take advantage of weakened opponents who land on this trap thanks to the priority it provides. Assault is best placed on well-traveled pathways in order to maximize the chance that someone lands on it or on the

Home panel of a desirable opponent.

Path Blockers synergizes well with this card, allowing the player to force potential opponents to fight them. The player can even place it on their own

Home, with the purpose of bluffing it as a {Ci|Piggy Bank}}, tricking opponents into trying to stop there.

Due to traps being unpredictable, the player does not always have a good idea of when Assault will be triggered, or by who. The trap can easily be wasted if an uninjured character lands on it rather than the intended target. It can even backfire if it is triggered while the player is at low HP or suffering a KO. Characters who want to avoid fighting their opponents should not be adding Assault to the deck. This includes weaker characters like Marie Poppo who cannot fight effectively, as well as tanks like Fernet who want to avoid taking unnecessary damage. In general, if the character has trouble getting a KO when Assault is triggered, they should consider using a different card.