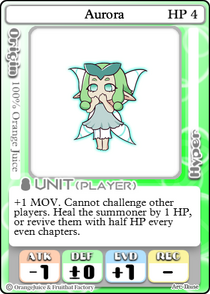 Aurora (オーロラ Ōrora) is one of the three minion units featured in Bounty Hunt Mode. It was added to the game alongside the permanent addition of Bounty Hunt Mode during the Bounty Hungers event.

Aurora appears in Bounty Hunt Mode as a minion that can be purchased from Alchemists, with a base price of 75

. It holds no stars or cards upon being summoned.