100% Orange Juice Wiki
Register
Don't have an account?
Sign In
Advertisement
in: Level 1 cards, Trap cards, Base pack,
and 4 more 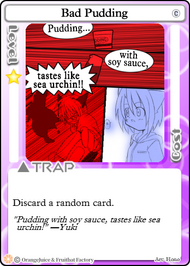 Bad Pudding is a collectible Trap card that can be acquired from the Base Pack.

Upon use, this Trap card is set on the player's current panel. When this card is triggered, a random card will be discarded from the affected unit's hand.

Bad Pudding is an effective tool for players looking to mess with their opponent's plans. Discarding a vital card can prevent an opponent from being able to safely perform or defend an attack. Most characters can use this card in their deck, but some benefit from it more than others. Aru synergies very well with this card, as it is cheap and easy to play, making room for additional cards generated by

Present for You. Mei can make use of it for similar reasons, allowing her to get

As with all trap cards, a player must land on it in order for it to be effective. There is always a chance that opponents will be able to avoid the trap, effectively making it a dead card. If the player that triggers the trap has no cards in their hand, or a junk card is discarded, then the same is true. The random nature of the discard means that Bad Pudding can sometimes leave useful cards in the victim's hand. Bad Pudding faces competition with

Tragedy in the Dead of Night for deck slots. While it can be played much sooner, other traps offer much more devastating effects for their level.