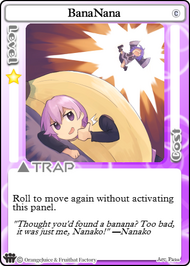 BanaNana is a collectible Trap card that can be acquired from the Community Pack 3.

Upon use, this Trap card is set on the player's current panel. When triggered, causes the affected unit to roll for movement again, without triggering the panel BanaNana was placed on.

BanaNana can be utilized as a form of disruption. Similar to another trap,

Go Away, BanaNana is often placed on

Home panels to deny an opponent's norma. Although, BanaNana can be placed by players with the intention of later stepping on it themselves, in order to avoid

Drop panels behind their

Sham can use this trap card in combination with

Delta Field to further increase the opportunity for opponents to land on detrimental panels, such as

Boss, if placed 1 panel behind, and the opponent is 1 panel away from the trap. Moreover, Sora can land on a previously placed BanaNana, while under the effects of

Due to the random nature of this card being the movement roll, BanaNana is generally suited for limited circumstances. This card can be hard to make full plans with, as the movement roll afterwards will be random, and other character's dice effects can vary. Players can put additional trap cards in front of BanaNana, to increase the odds a victim would land on one.