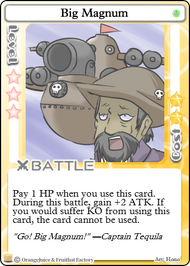 Pay 1 HP when you use this card.
During this battle, gain 2 ATK. If you would suffer KO from using this card, the card cannot be used.
Level
3 ☆
Cost
20 ★
Limit
3 per Deck
Deck Points

Big Magnum is a collectible Battle card that can be acquired from the Expansion Pack.

This card can only be used if the player's current HP is 2 or more.

Big Magnum is a purely offensive battle card with the sole purpose of helping the user strike their opponent with even more force during the battle. The card's main draw is the massive attack boost it grants, letting neutral characters go on the offensive and giving offensive characters a huge edge in combat. Most characters with at least a +1 attack stat can benefit from the card as long as their health HP is high enough to support its use. The characters who can get the most out of the card, however, are bully characters such as Yuki or Star Breaker, who can reach a staggering +4 attack, making it difficult for more fragile characters to survive even at full health. As a result of the substantial boost provided by the card, the card is often best used either against frail characters with little or no defense boost and reliance on evasion, such as Aru or Saki, or opponents who are already very low on HP.

Despite its strength, Big Magnum has two key weaknesses. The first is that the card can easily be wasted if used recklessly at the wrong time. Tank characters such as Fernet and Kyousuke still have a very good chance of surviving at high HP, and battle cards like

Shield Counter can mitigate the damage or counter the attack entirely. Perhaps more troublesome, if the opponent survives the player's attack, the user will be weakened by the HP cost and susceptible to being KO'd by the opponent's counter-attack. As a result, the player will lose at the minimum 2 points of HP unless they can evade the counter-attack. For the same reason, it is not recommended to play this card defensively unless the target has a poor ATK stat or is nearly KO'd themselves. The card's second and perhaps its worst fault is its HP cost. Health is often considered one of the most valuable stats and needing to pay a point of it for an attack boost may not be justified. This can make a weaker battle card like

I'm on Fire! more practical in certain cases as a defense debuff can be less hazardous than a guaranteed lost point of HP. Subsequently, low health characters like Nanako and Peat will have great difficulty using Big Magnum due to the health cost being proportionally much greater for them. Players using passive characters with low ATK stats should also avoid putting Big Magnum in their decks, as it will likely benefit the opponents out to KO them far more than it will themselves.