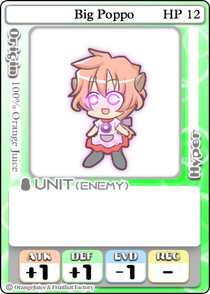 This page is about the Boss version of Big Poppo. For details on the Co-op Mode version, see the respective Co-op Boss pages.

Big Poppo is a character that appears BOTH on Boss panels in Normal Mode, and also as a minion spawned by Star Devourer and RoPoChi in Co-op Mode. Care should be taken not to confuse the two when going for unlocks.

Big Poppo is a rare boss, featuring a much stronger version of Poppo that does not appear under normal match circumstances. While the boss version was introduced for the Poppo Event, the event is not required to summon her to the board as long as the player has the appropriate cosmetics. In order to summon Big Poppo to the field, at least 1 player needs to play as Marie Poppo and wear a Poppo Event cosmetic. This includes:

Each player that is using Poppo and wearing at least one of these cosmetics, will increase the odds of Big Poppo appearing as the boss (instead of the normal default boss) during the Boss EncounterBoss Encounter
When Norma level 4 is achieved for the first time by any player, all

Boss panels. While Boss Encounter is in effect, any player who stops on a Boss panel will battle the Boss unit. This event will continue until the Boss unit is defeated. event by +25%.

If the player is hunting for the achievement or color pack, they could use 1 of 2 strategies to easily accomplish the task. The first strategy is to bring 4 players as Poppo in one of the above-listed cosmetics for a 100% chance of Big Poppo spawning. The player can then respawn Big Poppo multiple times by having each of the players bringing a copy of

Oh My Friend in their deck. The second strategy is to only bring 3 Poppos in for a 75% chance and have 1 player as NoName. The NoName player can then use