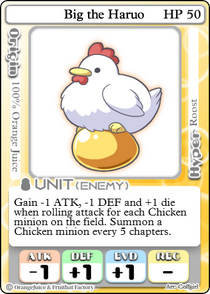 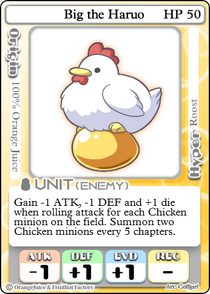 Big the Haruo (ビッグ・ザ・ハルオ Biggu za Haruo) is a special super-powered boss only found in Co-op Mode. It was originally introduced during the Minions of the Master event in 2019, which also introduced the mode as a permanent game mode.

Big the Haruo is the first boss of the Co-op mode. It has 50HP, and a stat line of -1 ATK, +1 DEF, and +1 EVD. A relatively tame boss, Haruo is centered around chicken "minions" (referred to as "enemies" on its cards) which it can spawn to the board to increase its own power against the player. Almost all of the cards at the bird's disposal are centered around either making its minions stronger or enabling it to deal a large amount of damage to the players during combat. Every 5 chapters, it uses its hyper,

Roost, to spawn a Chicken minion (or 2 minions in hyper difficulty), up to a maximum of 4. While each minion will lower Big the Haruo's stats, it will add an additional dice to its combat rolls, putting the players at a steep disadvantage. For example, 2 minions will result in Big the Haruo having a deadly 3 dice at its disposal during combat. The minions can also have their stats boosted through the use of cards such as

Headless Chicken among others, which will enable the chicken minions to better cope with the stats of the players.

Additionally, Big the Haruo has cards that focus primarily on itself to deal directly with the player. Haruo can periodically heal itself using cards like

Second Wing. It can also deal damage through the use of event cards such as

Hen Pecked to punish players nearby. Peck can be particularly effective against players who finished attacking Big the Haruo the previous turn.

The players best bet for defeating Big the Haruo is to make sure the great hen always has very few or no chicken minions. Without minions, Big the Haruo's chicken support cards are useless, its stats are unimpressive, and it will have to rely on direct damage cards to deal any substantial damage to the player. As long as the players brings a strong attack unit to crack its HP and KO its minions, they will slowly be able to chip away at its health and easily defeat Haruo.