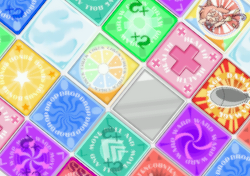 Panels are colored tiles that the player will navigate their characters onto during a match. Every board in 100% Orange Juice! is composed of numerous interlocking panels that add an extra layer of difficulty and strategy to the game.

Each panel has its own unique effect, and some have different effects depending on the game mode. A panel's effect will take place when a player lands on it, if they are not KO'd, after any combat and/or trap cards take place. The types of panels available to land on differ depending on the board, but panels can also be transformed through card effects, field events, and mixers.

Every board in the game features 4 home panels and a varying amount of bonus, drop, draw, and encounter panels. All other panels are only seen on some boards, or are exclusive to a certain game mode or field event.

Double panels function identically to their standard counterparts, but have twice the effect. For example, where a player would usually roll 1 dice, they will roll 2 instead. Some boards may include a small number of double panels in their layout, but double panels are primarily seen during the MiracleMiracle
Every 5 Chapters, all

Double panels accordingly. This effect lasts for the duration of the Chapter. field event/mixer.

There is a limit to how many times a player is allowed to activate Move, Warp Move, Move (x2), and Warp Move (x2) panels in a single chapter. This is usually seen when a player uses a card effect or field event to roll multiple dice during their move roll. If the player ends up in such a situation where they are consecutively landing on these types of panels multiple times in one turn, they are limited to a maximum of 5 extra move rolls. Upon reaching this limit, the player will no longer be able to activate any more of these panels for the rest of their turn, simply stopping on the panel without activating it.

There is a limit to how many ice panels a player can travel across in sequence. Ice panels normally do not deduct from the player's move roll; however, after crossing 10 ice panels in a row, the next panel will automatically deduct from the move roll regardless of the panel's type. This means that, given a long enough sequence of ice panels, the maximum distance that a player can travel is 11 times the player's remaining move roll.

A number of boards contain dead ends, which are locations on the board where the player cannot continue moving forward and is forced to land on either a Warp or Warp Move panel in order to warp back to the main part of the board. However, the player may sometimes end up stuck in a dead end. This usually occurs in one of 3 ways: