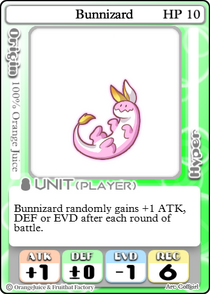 Bunnizard appears in Bounty Hunt Mode as a monster that can be fought in Bounty Battles. Bunnizard is classified as a hard bounty, granting 4 fame upon KO.

Bunnizard also appears as an opposing enemy unit on the field in Wanderers Episode 3.

It has the same stats and passive as in Bounty Hunt Mode, as well as a REC of 6, and does not possess a Hyper. Due to the absence of Bounty Battles, Bunnizard's passive will only activate when effects that add extra rounds of combat (such as