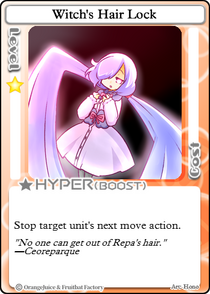 Ceoreparque's Hyper is Witch's Hair Lock. When used, the player will be prompted to target any non-KO'd unit. This can also target the player. Upon doing so, the target will be forced to skip their next move action. On the target's next turn, upon performing their move roll, the target will instead skip the dice throw, move 0 spaces, and trigger their current panel.

Witch's Hair Lock is a unique Hyper. The card is not only extremely powerful if used correctly, but is also free with a low level requirement for activation. As the Hyper can lock any player the user chooses including themself to a panel, and cause the panel to re-trigger, it allows for a variety of both offensive and defensive tactics, including, but not limited to:

However, arguably the most powerful tactic is the ability for the player to lock themself on their own home panel, allowing them to norma for two chapters in a row. If the player has at least 200 stars, and uses the Hyper on themself after receiving Norma level 5, they will automatically win on their next turn if no other player does, as the

The main downside to the Hyper is that it is only powerful at the opportune moment. As the Hyper's effect does not deal damage, put any player in danger by default, or increase Ceoreparque's stats, it is critical that the player times the effect perfectly or its effect will be wasted and have very little impact.