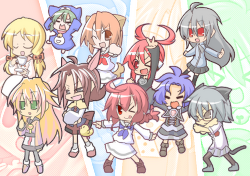 The Characters section of the shop sells all available characters in the game.

100% Orange Juice!, at its core, includes 19 characters. The player will choose one of four starting characters offered at save file creation, and the other 18 require unlocking either through completion of campaign episodes or through alternate methods. By completing campaign episodes, new characters will become available in the characters section of the shop for purchase.

There is currently a total of 76 playable characters in the game: 19 base game, 51 DLC, and 6 bonus.

In addition, there are 2 event characters that were only playable in certain game modes for a limited time.

There are a number of different categories of playable characters available in the base game of 100% Orange Juice!

Boss panels. These player characters are distinct from how they are as enemy characters, with different stats and passives from the enemy versions. Unlike other base game characters, they are unlocked exclusively through leveling up by playing online multiplayer games, and are unable to be purchased or obtained otherwise. Care should be taken to not confuse the Unit (Player) versions of these characters with the Unit (Enemy) versions when purchasing them in the shop.

These are characters who are completely hidden from the character select screen rather than being greyed out. They cannot be purchased in the shop, instead being instantly unlocked upon completing a secret and elaborate unlock method. There is currently only one hidden character in the game.

Although DLC characters appear in the shop, they cannot be bought in-game, and must be obtained through purchasing the DLC on Steam. Once the DLC is purchased, both characters are automatically unlocked and ready for use, available to the player free of any star price.

Having access to the games through Steam Family Library Sharing will also let you use the bonus characters, for as long as the Library Share is maintained.

Note that only Orange_Juice games published by Fruitbat Factory will unlock bonus characters, meaning no character is awarded for owning Suguri or Acceleration of SUGURI X-Edition HD.

There are some characters that cannot be selected under normal circumstances, and are only playable during certain game modes. These characters cannot be unlocked, instead becoming available only during limited-time events.

NPC cards are cards featuring the stats of the different non-playable characters that appear in the game. These cards have no use in game other than adding to the card binder for collection purposes. Unit cards for the base game NPC's will appear in the shop as games are played, while other NPC cards can have a variety of unlock methods, although most are available by default.

The unit cards of Guardian (Playable), Aurora (Playable), and Big Poppo (Knights and Faeries) do not appear in the card binder, only being viewable in-game. In addition, Big Poppo (Normal Mode) and the special Co-op Mode Encounter panel units do not possess a unit cards, viewable or otherwise.

NPC cards appear in various sections of the card binder.