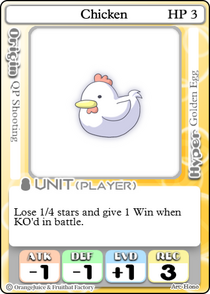 Theme
▶️
For the enemy unit version of this character, see: Chicken (Enemy)

Chicken (ニワトリ Niwatori), also known as Haruo (ハルオ Haruo), is one of the playable NPC characters in 100% Orange Juice!.

Pros
+ Above average EVD
+ Loses half the normal amount of stars on KO
+ Low recovery time
+ Only worth one win, making it a less valuable target for win seekers
+ Hyper has no cost and has a positive effect when Chicken triggers it, and a negative effect on any other character. 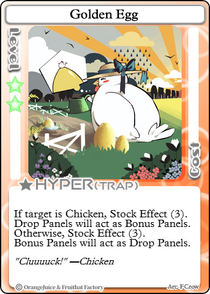 Chicken's Hyper is Golden Egg. Upon use, this Trap card is set on the player's current panel.

This card has varying effects depending on the character that triggers it.

As this trap card has a beneficial effect if Chicken lands on it, the best place to play this card is on your Home space, as it virtually guarantees you will land on it after you go all the way around the board. This can also be used to trick other players into trying to land on your home space, expecting a trap card like

Piggy Bank and instead getting stuck with the negative effect of the trap.

Another possibility is to play this trap card on your opponent's home spaces, since this will temporarily impair their ability to gain stars. This is less effective if the opponent is playing for wins, however.

All in all, this Hyper, being a trap, can be played just about anywhere, and since it has no cost, there's really no wrong time or place to use it. 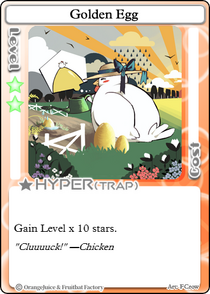 In Co-op mode, Chicken's stats and passive do not visibly change. However, part of Chicken's passive does not function:

Chicken's passive and Hyper are unchanged in Bounty Hunt mode.

Chicken's base stats give it 50 starting stars and a discount of -25% at shops.

To unlock Chicken as a playable character, along with its unit card and Hyper card as binder collectibles: