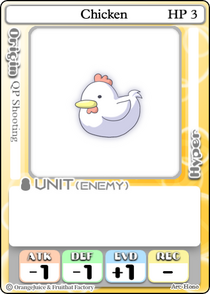 Chicken (ニワトリ Niwatori), enemy variant, is one of the NPC enemies on boards in 100% Orange Juice!.

Chicken (Enemy) is among the weakest of all NPC enemies, with negative DEF and ATK with the HP of Peat. While weak, due to the positive EVD stat, it is not uncommon for Chicken to survive far longer than it should.

Chicken (Enemy) can be fought when landing on