Chocolate for the Sweet Gods (2019 Rerun)

Chocolate. Those who had previously participated in this event in 2018 retained their earned chocolate count from before, being able to pick up where they left off. In addition,

Arcade Tokens instead of 3 for the duration of the event.

The goal of the event is to collect 20000 pieces of

Chocolate from matches from the ground, enemies, or other players to complete the event campaign.

Home space to store them, preventing them from being stolen. They can be collected in both Singleplayer and Multiplayer, but not while playing Campaigns. 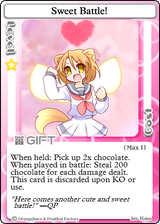 Chocolate. This can be done either in Single Player or in Multiplayer. If done in Single Player, pressing the Control or Shift keys to speed up the game will cause a penalty to be applied to the chocolate total received at the end of the game.

Upon completion of collecting all pieces of chocolate, the player will unlock the ending cutscene, three QP and QP (Dangerous) Pudding Costumes and more random drop items to collect.

Chocolate Dice and the challenges from the event. This allowed players to unlock the following cosmetics without having to obtain them randomly from the mystery bag.