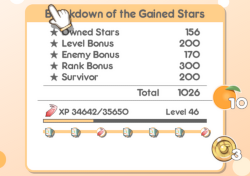 Co-op Mode uses a special reward modifier calculation to determine how much XP the player gets toward their co-op role, as well as how many

Oranges they will receive if it was an online match. This topic is touched on the co-op bosses and mixers page, but not thoroughly covered in-depth. This page explains the exact equation in finer detail.

As a quick summary, co-op rewards are mainly affected by the outcome of the match, the difficulty, and the current mixers. Rewards can therefore be maximized by winning co-op matches on higher difficulties with detrimental mixers enabled. In contrast, rewards will be at their lowest after an early loss on lower difficulties with mixers disabled.

The first reward modifier is which boss difficulty the player selected. Each difficulty provides a percentage that affects the number of

Oranges and amount of role XP. The base values within the game's code for a co-op game with no mixers is as follows below. (This is not to be confused with the actual value the player receives. These are the base values the equation uses, not the amount received.):

There is much more than meets the eyes to the table above, however. As previously mentioned, a calculation is at play. This calculation is the base value of XP and oranges the player would receive from a normal match with no mixers multiplied to the difficulty modifier and then rounded down. The base number for oranges and role XP is 6 and 100 and respectively. Here is a table illustrating an explanation of how the calculation were done to get the values in the above table:

The second reward modifier is the mixers that are in play during the match. If the player does not have mixers active, this modifier is an automatic +0% (no effect on the final equation). All the mixer percents are added together to equal the mixer modifier. Please refer to this page for additional information about the type of all mixers. Below is a table of the mixer difficulties percentages:

Based on the table, the maximum mixer difficulty modifier the player can have is 75% if they receive three negative mixers. Please see the mixer page to see which mixers are positive, negative, or neutral.

The third reward modifier is the outcome modifier, which is based on whether the player wins or loses the match. If the players successfully defeat the co-op boss and win the game, this modifier is an automatic 120%. If the players lose, the formula applies. The formula for this process uses the base value 3.333% which represents 1 of 30 chapters. This value is multiplied to the number of chapters the players survived. This only up to a maximum of 30 chapters, however, and any chapter after 30 will be treated as 30 in the equation. The result is a percent which acts as the outcome modifier, and it is rounded down. Below is a table with examples of this calculation:

If the Double XP Event is currently active, then the final number in the equation is multiplied by 2. Unlike other modifiers, this affects only XP and not oranges.

Although the exact mathematical effect on the final reward amount is unknown, it is confirmed that using the ctrl/shift buttons in singleplayer to speed up the game will result in a reduction of rewards, with the amount of reduction increasing the longer ctrl/shift is held.

To calculate the total number of oranges that all players will receive, all the modifiers are added together and multiplied with the base value to form the following equation:

Below are some examples of the equation in action and the exact number of oranges the players will receive after winning or losing:

To calculate the total amount of co-op role XP that all players will receive, all the modifiers are added together and multiplied with the base value to form the following equation:

Below are some examples of the equation in action and the exact amount of XP the players will receive after winning or losing: