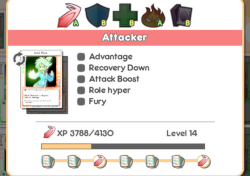 Co-op roles are a crucial part of 100% Orange Juice!'s Co-op Mode. Given that Co-op Mode centers around defeating raid boss-esque bosses, roles serve an important purpose by granting unique abilities that the players can use to both support each other and inflict greater damage to the boss.

When the player is taken to the deck builder screen before a match, their character will be featured with a symbol on their left. This symbol indicates the current role the player is set as. Likewise, if the player is playing with others online, they will be able to see what roles the other players are using as well as their level in that role above their deck. To change their role, the player can press the symbol next to their character which will pull up the role selector menu. From top to bottom, this menu displays: buttons to change roles, the player's current role, the option to swap their hyper with a role hyper, bullet points of the role's abilities that display more detail when hovered over, the player's current role level, the player's current XP in the role, and what abilities have been unlocked at the bottom. Some of these options are locked until the player levels up their role. Below is an example of the difference in options available between a low-level role and a high-level role selector menu.

At the top of the role selector menu, the player can press a different symbol to change roles. Each symbol is marked with that character's role rank in each role, which varies from character to character (For a reference of all the ranks see the co-op character ranks chart). A character's role rank will range from A-E, and indicates how well the character is expected to do in a specific role based on their stats, passives, and Hyper. For instance, a character like Peat is a Rank B Dealer, as the Dealer role increases the player's hand size which works well with Peat's Hyper,

Blue Crow the Second. In contrast, Peat is a Rank E Avenger, as the Avenger role works better on high HP characters.

Each role in Co-op Mode features unique characteristics that provide the player with effects and stat modifications. Generally, roles focused on damage such as the Attacker and Avenger role focus more on modifications that are primarily to aid the player in defeating the boss, as it gets stronger the longer the game progresses. Roles such as Guardian, Support, and Dealer are generally more focused on supporting the attacking players and provide abilities that enable the player to aid their fellow players in a multitude of ways.

The Attacker, Guardian, and Support roles are unlocked by default. The Avenger and Dealer roles must be unlocked either by reaching Level 10 in other roles, or from certain events. Finishing a game as any role will grant XP towards its role level.

Every role has a number of unique abilities that they can utilize by activating them to trigger their effect, similar to using cards. Abilities are accessible as an extra button, which (depending on the ability) appears either alongside the "Move" and "Card" buttons that appear at the start of the player's turn, or in battle as an extra option alongside "Fight" and "Card". Abilities are a major part of a role's kit, due to their general ease of use and availability. Most abilities have a cooldown between each use before they can be used again, and each ability has a different cooldown rate. Cooldown duration for each ability are listed on each player's stock info plate.

Most roles unlock a new ability upon reaching level 5 with that role, but many abilities are available by default.

Once a player reaches Level 10 in a role, they will unlock that role's unique Hyper card. This grants the player the option to change their character's Hyper during role selection, using the role Hyper in place of the character's original Hyper card. Generally, each role's Hyper card functions as a more powerful version of one of that role's abilities.

As the player uses a co-op role, that role can be leveled up, increasing its role level. By finishing co-op games, the player will earn XP towards the role they were playing as. With enough XP, the role's level will increase. This leveling system is separate to the online level XP system, and functions in tandem with it during online co-op games.

A role's level and current XP can be viewed during role selection. In addition, all of a player's role levels can be seen in online lobbies when the lobby is set to Co-op, by hovering over the symbol in the lower left corner of the player plate. Each player's role level for their current role is also seen next to their avatar in-game.

Various bonus effects for a co-op role can be unlocked by leveling up that role, including extra deck points, role abilities, and the role Hypers. In addition, various collectibles can be unlocked, including new co-op roles, as well as co-op role themed cosmetics and achievements. Lastly, the player will earn 50

Oranges every time a level up is achieved, regardless of the role's current level.

The amount of XP earned at the end of a co-op game is dependent on a number of factors, including the result of the match, the selected difficulty, and the current active mixers. It should also be noted that in singleplayer, the player will receive a penalty to XP if control + shift is used during the match.

Below is an example table showing the XP amounts needed to reach the first 30 co-op role levels. It should be noted that, much like online XP, there is no cap to role XP, allowing each role to be leveled up indefinitely.