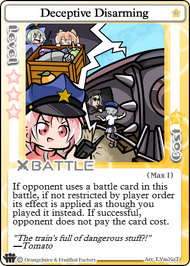 If opponent uses a battle card in this battle, if not restricted by player order its effect is applied as though you played it instead. If successful, opponent does not pay the card cost.
Level
3 ☆
Cost
10 ★
Limit
1 per Deck
Deck Points 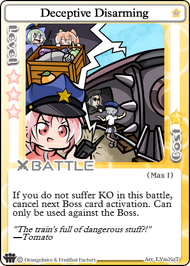 If you do not suffer KO in this battle, cancel next Boss card activation. Can only be used against the Boss.
Level
3 ☆
Cost
10 ★
Limit
1 per Deck
Deck Points

Deceptive Disarming is a collectible Battle card that can be acquired from the Community Pack 3.

When used in a battle, the player will steal the opponent's battle card and use it as their own, unless the card is restricted by player order.

Deceptive Disarming is a battle card that uniquely gives the player the ability to seize the opponent's used battle card. This can be used to turn the tables against the opponent if they play a powerful card. If the player is in a dangerous situation in the late game, they can use it as protection to strike back against an attacking opponent. It can also be used offensively to prevent the opponent from protecting themself with defensive cards such as

Self-Destruct will prevent the opponent from protecting their stars, and stealing

Blue Crow the Second or

Beyond Hell could allow you to attain a massive potential stat boost in place of your opponent. Another great card to block with it is

Big Magnum since it still gives the Deceptive Disarming user a greater chance of survival (unless they are at 2 HP), and it will fully negate Big Magnum when the user is at 1 HP.

Despite the benefits of this card, there is still some inherent risk, as it can end up useless in many scenarios. It will be an effective waste of 10 stars if Deceptive Disarming is played against a card that affects both players (such as

Reverse Attribute Field), a card that is restricted by player order (such as

Shield Counter), or if the opponent doesn't play a battle card at all. In addition, the card's potential effectiveness is decreased if there are few battle cards in the deck, or if there are no opponents with battle card Hypers. As such, it can take a skilled amount of prediction in order to determine the best time to use the card.