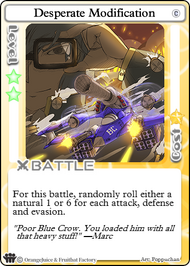 For this battle, randomly roll either a natural 1 or 6 for each attack, defense and evasion.
Level
2 ☆
Cost
10 ★
Limit
3 per Deck
Deck Points

Desperate Modification is a 2-star battle card with the potential to make or break a battle the user is in. Upon activation, the player's dice will only roll either a 1 or 6 for each dice used during the battle. (Each dice for each action has a 50/50 chance)

Desperate Modification, much as its name implies, is as a card that has many uses but is ideally activated when the user is out of options, much like

Extension. The card itself is comparable to a coin flip, providing either reward or tragedy to the user, and the card carries the advantage of being usable both defensively and offensively. If the player is down to a single point of HP, the card might just save them from the opponent and enable them to KO them in return. Or in the inverse, the player can make the ultimate gamble and, as a last-ditch effort to win, use the card to try and KO the leading opponent and steal their stars. This can be especially risky but rewarding if the opponent is on a

Home panel and the player could win the game by KO'ing them. The card can also be combined with certain cards and effects as well, yielding unusual but potentially effective results. For example, if the player uses the card with

Accelerator or the double dice effect from PlaygroundPlayground
Places several

Minigame panels around the board. These panels will trigger a minigame for any player who lands on them. The panels are then removed at the end of the Chapter. before activating the card, they have a chance to roll either a 2, 7, or 12 depending on their luck. Likewise, if the player uses

Little War before using the card, the player has a chance to either butcher the opponent twice with 6s and hopefully get a KO or for a quick and disappointing self-KO to occur. Desperate Modification does not need to be used as an emergency card, however. If the player is using a character like Miusaki or Kyoko for example who have either effects or stats that make a 1 roll not so bad, the card may be viable for general use given its low price and level. A more unconventional use for the card can also be found by using it to counter

Delta Field, as the effect of the card will override the hyper since it will be activated second.

By its very nature, Desperate Modification is a flawed card, however, as it is a coin toss. The player may get exactly what they want and get the 6 they crave to survive or KO an opponent or they may be served with terrible consequences. The card's performance is incredibly unpredictable and not necessarily beneficial to the player. At its absolute worst, the player may have been better off simply rolling the dice without the use of the card, especially if the opponent rolled a 1 and the player has no defense or evasion buffs and gets a 1. A 6 dice roll also does not guarantee anything for the player, as the opponent may roll a 5 or 6 as well and be able to survive/counter-attack the player, depending on who started the fight. Since each dice roll is a 50/50, the player may get a 6 for attack and 1 for defense and vice versa. In short, the player might get wonderful results from Desperate Modification, or they might get worse than nothing.