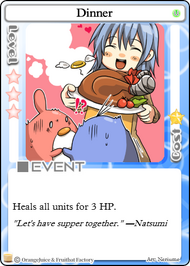 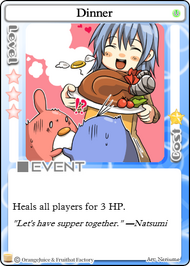 Dinner is a 3-star event card that heals every player for 3 HP.

Although this card helps opponents as well as the user, the real strength of Dinner comes from the fact that the player will be healed no matter which player uses it. Characters who need healing but are not concerned with the fact that the heal is symmetrical will benefit most from this card. Passive characters with high health pools like Arthur, tanks like Fernet, or combat characters with high one-shot potential like Nath will all make good use of Dinner and should consider using it in their decks. Natsumi can play Dinner as an additional healing card to trigger her passive, although too many Dinner cards will make it difficult for her to use her hyper

Cooking Time effectively. As for other characters, using Dinner becomes a lot more situational. The player should wait for an opportunity when the heal will benefit them more than it will their opponents, such as when the other players are close to full health or KOed. Dinner can even be used to help deny opponents from KOing each other in a pinch.

On the other hand, characters who want want their opponents to be injured so they are easier to pick off like Star Breaker should avoid playing this card unless they are desperate for a heal. Characters who want to retain damage themselves like Syura or Alte need to be careful of this card as well. Dinner doesn't benefit character who are at a high risk of being one-shot due to their low health. Suguri benefits more from evasion boosting cards like

Rainbow-Colored Circle over Dinner and Chicken usually forgoes defensive cards entirely due to its frailty, low REC, and passive. Lastly, characters like Marc or Mei whose hypers rely on their opponents being damaged should avoid putting this card in the deck in the first place.