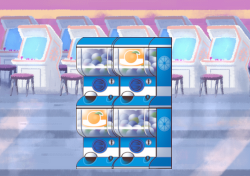 Emotes are special cosmetic items that can be used in the in-game chat. When unlocked they can be viewed and used in the chat of an online lobby by clicking on the

icon to the right of the text field. Each emote also has a name that can be manually typed into the chat window as well.

There are a vast collection of emotes to obtain and use, most of which depict the various characters of 100% Orange Juice!. The majority of emotes are simply adaptations of poses already in the game, but there are a number of emotes adapted from card art, as well as some emotes made from brand new art.

There are currently 706 emotes in the game, with players being given 20 to start with. More can be unlocked by buying them in the Shop or winning them from the Emote Gachapon in the Arcade.

The 20 default emotes are automatically given to all players. For all other emotes, they must be bought in the Emotes tab of the Shop, or won from the Emote Gachapon in the Arcade. All emotes cost 45

Oranges to purchase from the Shop, except the Special Emotes, which cost 75

Oranges per try, and it will give out a random unowned emote each time (similar to crates).