100% Orange Juice Wiki
Register
Don't have an account?
Sign In
Advertisement
in: Level 3 cards, Trap cards, Cards with no cost,
and 3 more 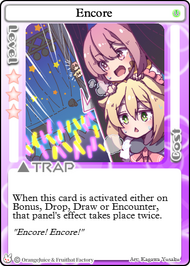 When this card is activated either on Bonus, Drop, Draw or Encounter, that panel's effect takes place twice.
Level
3 ☆
Cost
0 ★
Limit
3 per Deck
Deck Points

Encore is a collectible Trap card that can be acquired from the Pudding Pack.

Upon use, this Trap card is set on the player's current panel. When triggered, causes the effects of

Boss panels it is placed on to trigger twice. This effect extends to x2 variants of these panels.

The best panels to play Encore on depends on the playstyle of the player. Playing this card on a

Bonus panel or a

Draw panel can be risky, but also rewarding. Doing so could trick other players into avoiding that panel in fear of landing on a detrimental trap, which would allow the player to get a double helping of stars or cards the next time around the board. Of course, if someone else lands on the space, they get the benefit of the trap. For win-focused players, Encore should instead be primarily placed on

Encounter panels. This gives the player more chances to obtain wins as well as forces anyone else who lands on it to to do battle twice. This can be especially effective during a Boss EncounterBoss Encounter
When Norma level 4 is achieved for the first time by any player, all

Boss panels. While Boss Encounter is in effect, any player who stops on a Boss panel will battle the Boss unit. This event will continue until the Boss unit is defeated., as many characters have trouble surviving a battle against the boss, let alone two of them. Playing Encore on a drop space can also be a good idea, as it will force anyone who lands on it to roll twice for star loss.

Playing Encore on any other type of panel is a waste, since it will have no effect. Because of this,

We Are Waruda can cripple this card by moving it to a less desirable, or even useless, space. Standard trap counters like

Star-Blasting Light will also negate the effects of this card.