100% Orange Juice Wiki
Register
Don't have an account?
Sign In
Advertisement
in: Level 2 cards, Trap cards, Cards that cause star gain,
and 6 more 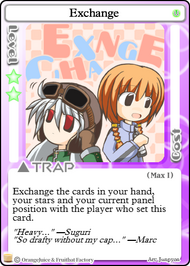 Exchange the cards in your hand, your stars and your current panel position with the player who has set this card.
Level
2 ☆
Cost
0 ★
Limit
1 per Deck
Deck Points

Exchange is a 2-star trap card that causes the setter and the victim to swap stars, hands, and board positions. Wins and normas are unaffected.

Exchange is a trap that has the potential to change the outcome of a game in an instant. Exchange is best used to swap stars with a player with a higher star total than you. When used correctly, it can easily steal its user enough stars to win while denying an opponent. In order to control who lands on this card, it is best placed on the home panel of the intended target. Alternatively, being one of the few trap cards that are harmless when the setter triggers it, the player can set it on their own home base as a bait or to deny someone from using it to achieve norma. Combat type characters who don't depend on cards like Yuki can benefit greatly from this card, as it does not affects wins nor normas.

Although powerful, there are many ways that Exchange can cause problems for the player who set it. If the player is ahead, Exchange becomes very unfavorable to play due to the risk of handing their lead to another player. Being a trap card, it does nothing until it is triggered. If the the trap goes for too long without being triggered, there is a chance the player can catch up or even get ahead, causing them to lose advantage once it is finally triggered. Star collectors like Aru or Marie Poppo are at particular risk of this happening, and should not put Exchange in their decks.