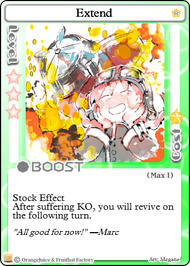 Stock Effect
After suffering KO, you will revive on the following turn.
Level
3 ☆
Cost
10 ★
Limit
1 per Deck
Deck Points

Extend is a collectible Boost card that can be acquired from the Expansion Pack.

Upon use, the player gains the Extend stock effect, which will be consumed the next time the player would make a recovery roll. Upon doing so, the recovery roll will not take place and the player will instead revive automatically.

Extend is a great boost card that can benefit nearly every character on the roster, and its remarkable cheapness relative to its powerful effect makes it a popular choice to many players. The card is often a staple in the decks of high recovery stat characters, as the card is best put to use on characters with a high recovery stat such as Tomomo and Sweet Breaker among others. Without Extend, the average amount of recovery attempts for characters with a recovery stat of 6 is roughly 3 chapters, which can put the player back quite a bit, especially if they are seeking wins. Extend substantially benefits the player, causing them to only lose one turn, and enables them to pursue the opponent that just KO'd them before they get too far. Likewise, the knowledge that the player will recover on the next chapter can act as a deterrent to an opponent with low health intending to KO the player. The card can also synergize well with characters like Alte who expect to be KO'd multiple times a game by their own hyper card in order to use their passive ability. Extend is also surprisingly effective on Shifu Robot despite his instant recovery, as it will heal him to full HP as opposed to 1.

Extend is not without its faults, however. The card can easily backfire. If there are multiple pursuing units still behind the player, the player will be open for attack again on the very next chapter without the chance of the opponents passing by while the player recovers. Opponents can then exploit the loop effect similar to Sora (Military)'s passive and bring the player down again, leaving them with even fewer stars and a recovery roll to deal with. The card also is not for every character on the roster. Extend has very little gain for characters with low recovery stats such as Peat, Tomato & Mimyuu and Nanako, who already possess an over 50% chance of recovering on the first turn.