100% Orange Juice Wiki
Register
Don't have an account?
Sign In
Advertisement
in: Level 1 cards, Boost cards, Base pack,
and 3 more 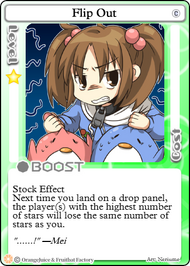 Stock Effect
Next time you land on a drop panel, the player(s) with the highest number of stars will lose the same number of stars as you.
Level
1 ☆
Cost
0 ★
Limit
3 per Deck
Deck Points
N/A
Symbol
30px
Illustrator
Neriume
Common Card
Base Pack
"......!" —Mei

Flip Out is a collectible Boost card that can be acquired from the Base Pack.

Upon use, the player gains the Flip Out stock effect, which will be consumed the next time the player triggers a

Drop (x2) panel. Upon doing so, the opponent with the highest star count will lose stars equal to the amount of stars lost by the player's subsequent Drop roll.

Flip Out is not a particularly powerful card, but it does have its uses. In the unfortunate event that the player has to land on a Drop panel, Flip Out will also inconvenience the opponent that is giving them the most competition. That isn't to say that players should dive for the nearest Drop panel, as they still end up losing stars.

Aru and Mei can use this card in their deck due to the fact that it can be played for free immediately, letting Aru gain more stars from

Present for You and giving Mei easier access to

Red & Blue. Star Breaker can also make use of Flip Out, as she doesn't usually care about losing stars due to being forced into completing win normas. She can use it to inconvenience star collectors while keeping her stars at a manageable level.

The main downside of Flip Out is that it isn't a terribly impactful card. Flip Out doesn't actually do anything until the player lands on a Drop panel, which is something most players should try to avoid doing. Because of this, Flip Out tends to be outclassed by other 1-star cards, which means it rarely sees play once the player has collected more cards to build decks with.

Nice Jingle are usually better inexpensive cards to play in most situations, as are most of the 1-star traps.