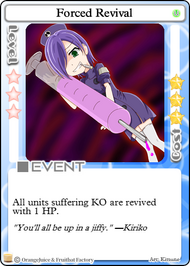 2
Symbol
30px
Illustrator
Kitsune
Uncommon Card
Expansion Pack
"You'll all be up in a jiffy." —Kiriko

Forced Revival is a 3-star event card that revives all KO'd units with 1 HP.

Despite the supportive implications of reviving an opponent, Forced Revival is anything but a support card outside of cooperative play. Forced Revival is a card made to punish opponents that would try to avoid being defeated in battle by KOing themselves via other means. Since players are revived with 1 HP, they become easy pickings for anyone who would follow up this card with an attack. Forced Revival is best used by offensive characters in order to pick off opponents for wins and stars. Iru and Kiriko can also make good use of Forced Revival due to both characters having advantages against opponents with 1 HP.

Passive players should not bring Forced Revival, as they will not be able to use it effectively. Passive characters like Aru or Natsumi do not usually have the tools to KO their opponents, so it becomes entirely up to their opponents whether the card is useful or not. Tanks like Fernet are far more vulnerable at 1 HP than other characters, so being revived by Forced Revival can prove disastrous for them. Even characters that benefit from playing Forced Revival can be harmed by it if it is used against them while they are KO'd, making it a risky card for anyone that would bring it to games.