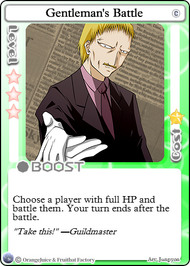 Choose a player with full HP and battle them. Your turn ends after the battle.
Level
3 ☆
Cost
10 ★
Limit
3 per Deck
Deck Points 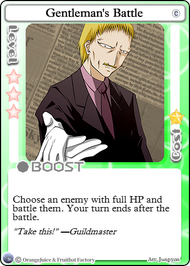 Choose an enemy with full HP and battle them. Your turn ends after the battle.
Level
3 ☆
Cost
10 ★
Limit
3 per Deck
Deck Points

Gentleman's Battle is a 3-star boost card that allows the user to challenge another player to a battle, as long as the opponent is at full health. The player's turn then ends.

Dash! is that weaker characters cannot use it to escape nearly well as offensive characters can use it to catch them. In addition, positioning is irrelevant for Gentleman's Battle, as it can target units from anywhere on the board and is only gated by the target's health.

The downside to Gentleman's Battle is that it can only be used when the target is at full health. As such, it cannot be used to pick players off. Tank characters such as Fernet are poor targets for Gentleman's Battle as they are incredibly hard to deal significant damage to. Characters with low ATK like Sham should not use this card in their decks, especially if they also lack defensive stats like Marie Poppo, as they have a low chance of accomplishing anything but a high chance of taking a lot of damage by playing it.