100% Orange Juice Wiki
Register
Don't have an account?
Sign In
Advertisement
in: Level 3 cards, Event cards, Base pack,
and 2 more 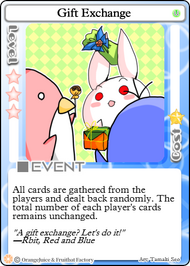 All cards are gathered from the players and dealt back randomly. The total number of each player's cards remains unchanged.
Level
3 ☆
Cost
10 ★
Limit
3 per Deck
Deck Points

Gift Exchange is a collectible Event card that can be obtained from the Base Pack.

When used, randomly redistributes all cards among the player's hands. Each player receives the same number of cards that they were holding previously.

Depending on the character, Gift Exchange can range from a very useful negate card to a disastrous event card that can throw the game away. This depends on whether a character needs their Hypers or specific cards and their statline. Characters with mediocre to bad Hyperss and good statlines like Yuki or Sherry receive massive benefits from having an on-demand card shuffle as they can prevent someone that would use a Hypers against them by giving it to someone else, or even gain it themselves. For example, if Sora is 6 or less panels away and them using

Extraordinary Specs would be a good play, using Gift Exchange gives a good chance of removing Extra Specs from her hand and giving it to someone else that isn't a threat at the moment. What makes it truly great on them, however, is the fact that they don't have to fear it backfiring as they rely on their stats to makes plays, instead of cards. Characters that do rely on cards, however, have to fear this card massively, as what could be their one chance to use their cards to make a play can be stopped with an effect that cannot be blocked. It's especially brutal for effects that announce what cards people have, as it removes the element of having to guess what cards they have. This means that characters that announce they have their specific cards like QP (Dangerous), Tsih, Nico, and Mei, gift cards, and even cards like

Passionate Research are all effortlessly countered by Gift Exchange.

Gift Exchange is not without downsides, however. For one, its effect is random, so it can end up not doing what the user wants it to do as their is no guarantee that it will remove what they want. This is compounded by the fact that the less cards in people's hands, the more likely it is that Gift Exchange wont do much. It's also reliant on making what is effectively a guess, so guess wrong and a Gift Exchange was used for nothing. Secondly, despite their being a chance that the user will gain a much better card like someone else's Hypers, they are less likely to gain those cards as using Gift Exchange doesn't count as a card in the user's hand after use. This also means that its entirely possible that someone else got a much better hand off of its effect. Despite that, the chance to gain the better card themselves is good on its own for non-card-reliant characters as they almost always benefit from its effect. Lastly, Gift Exchange also can't do much about cards that are typically used before norma 3, so its not a good answer for characters who are incentivized to use their cards early like Arthur.

Despite its flaws, Gift Exchange cements its place as one of the most terrifying cards to have to deal with for card-reliant characters.