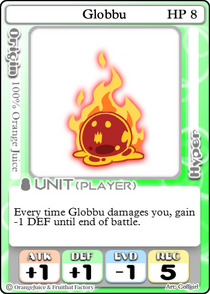 Globbu (マグマー Magumā) is one of the twelve non-playable monster units featured in Bounty Hunt Mode. It was added to the game during the Bounty Hungers event, which also introduced the mode as a permanent game mode.

Globbu appears in Bounty Hunt Mode as a monster that can be fought in Bounty Battles. Globbu is classified as an hard bounty, granting 4 fame upon KO.