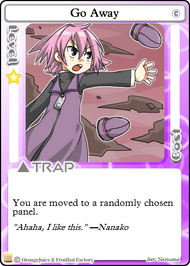 Go Away is a 1-star level trap that can be used as both a method of norma denial and relocator. When activated, the player that triggered the card will be moved to a random panel on the board.

Go Away is a versatile card that can fit into almost any deck. While the card itself is seemingly not that powerful, like a weaker version of

Here and There, the key advantage of Go Away is that it can be used on a specific opponent. Even if the player sets the trap carelessly and chooses not to set the card in a strategic location early on, it can still yield multiple positive outcomes. For instance, the trap can transport a weak opponent near the player enabling the player to KO the opponent or transport the player away from a pursuing character if they have low HP. Or quite simply, the card can cause general chaos by moving characters around the board, which can also be effective if it sets them near a

Boss panel. However, the arguably best and most common strategy for using Go Away is to place it on an opponent's

Home panel. This will effectively deny the opponent from receiving their norma and can be particularly devastating in the late game, even causing the opponent to lose the game in the right circumstances. The calamitous effects this strategy causes can also be further exacerbated by certain boards such as White Winter and Sealed Archive, in which the walking distance to the player's home often takes upwards of 4 chapters.

Far from perfect like all trap cards, Go Away mainly sufferers from the usual weakness of being drawn by an opponent and used in the same manner as previously mentioned. Likewise, it can also miss its intended target, even if successfully placed on the opponent's home. The wrong opponent may still trigger the card if they roll onto the other opponent's home. Go Away's effect can also be ignored or the card can be moved to a different location as a result of field events like Home RouletteHome Roulette
Every 9 Chapters, all player

Home panels are randomly rotated. or card effects such as