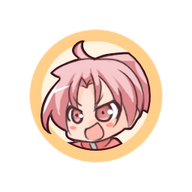 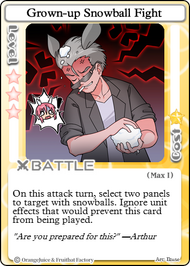 On this attack turn, select two panels to target with snowballs. Ignore unit effects that would prevent this card from being played.
Level
3 ☆
Cost
10 ★
Limit
1 per Deck
Deck Points

{{{deckpoints}}}
Symbol
30px
Illustrator
Ikuse
"Are you prepared for this?" ―Arthur

Grown-up Snowball Fight is a special Battle card that is automatically placed in the center deck during the Santa Scramble event. A total of 4 copies are available per game, along with 4 copies of

Snowball Reflector. Originally, these cards were added to the deck, giving the deck a total of 56 cards instead of the usual 48.[1]. As of Version 1.31.4, they will instead replace two cards from each player's deck, keeping the deck at the usual 48 cards. Grown-up Snowball Fight is unique in that although it is listed as a Battle card, it is used only in snowball fights rather than battles.