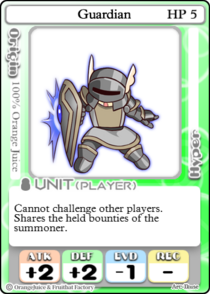 Guardian (守護者 Shugo-sha) is one of the three minion units featured in Bounty Hunt Mode. It was added to the game alongside the permanent addition of Bounty Hunt Mode during the Bounty Hungers event.

Guardian appears in Bounty Hunt Mode as a minion that can be purchased from Armories, with a base price of 100

. It holds one copy each of

Saki's Cookie, and stars equal to the amount that was spent on it upon being summoned. It may play any of its held cards when appropriate, using its own stars and the player's level at the time of summoning for the purpose of card requirements.