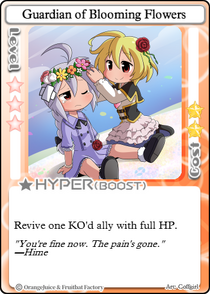 Guardian of Blooming Flowers is a Hyper unique to the Support role in Co-op Mode. The player can substitute it for their character's Hyper card after reaching level 10 with the Support role. It revives an ally with full HP, an upgrade from the Restoring Light ability.

Guardian of Blooming Flowers gives the supporter role yet another way to revive allies. This time, it is limited not by proximity or a cooldown, but by the player's ability to find a Hyper. This card is best used by characters who have good stats for the supporter role, but have a hyper card that does not aid their allies enough or is too restrictive to use. An example could be Saki. While

Big Bang Bell can be very useful against bosses with minions, it is not always reliable due to the possibility that the traps could be triggered early or not at all. The team could be better off with a more consistent effect in Guardian of Blooming Flowers.

The downside to using this hyper card is that it will replace a character's existing Hyper. Many characters that do well in the supporter role already have comparably strong hyper cards that they may prefer over this one, such as Natsumi's