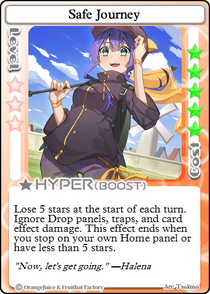 Lose 5 stars at the start of each turn. Ignore Drop panels, traps, and card effect damage. This effect ends when you stop on your own Home panel or have less than 5 stars.
Hyper Info
Effect Type
Boost
Level
3
Cost
5 ★
Symbol
[[File:|30px|link=]]
Illustrator
Tsukino
"Now, let's get going." ―Halena

Drop panels or traps, and will be immune to card effect damage. In addition, the player will lose 5 stars every turn at the start of their turn. This effect lasts until the player lands on their own

Home panel, or at the beginning of their turn if their number of held stars is below 5.

Safe Journey is a protective Hyper, providing an effect similar to a combination of

Metallic Monocoque. As its name suggests, the Hyper works well at protecting the player from a lot of hazardous effects on their way to their

Home panel. It is important to note however that the player should do all they can to avoid any battles or

Boss panels since it does not provide protection against them like Crystal Barrier. This is important because the Hyper's effects do not go away on KO. So while the player may have had enough stars to complete a Norma when they first activated the Hyper, after losing their stars to a KO Safe Journey will still be active and the player will still keep losing 5 stars a turn.

Despite its strengths, however, Halena should rarely use her hyper since losing 5 stars every turn can easily give someone else the star lead. It should really only be used if she cannot afford to go on the double drop on Clover, or to avoid a trap that someone put on her home when she is very close to her home.