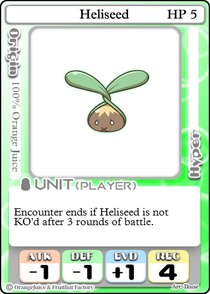 Heliseed (ヘリシード Herishīdo) is one of the twelve non-playable monster units featured in Bounty Hunt Mode. It was added to the game during the Bounty Hunters event, which also introduced the mode itself. Heliseed is also featured in the Wanderers campaign.

Heliseed appears in Bounty Hunt Mode as a monster that can be fought in Bounty Battles. Heliseed is classified as an easy bounty, granting 2 fame upon KO.

Heliseed also appears as an opposing enemy unit in Wanderers Episode 1. It has the same stats and passive as in Bounty Hunt Mode, as well as a REC of 4, and does not possess a Hyper. Due to Bounty Battles not existing in Normal Mode, Heliseed's passive only comes into effect when