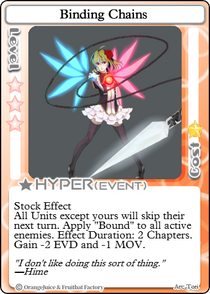 Hime's Hyper is Binding Chains. When used, all units other than the player will skip their next turn. In addition, the affected units will gain -2 EVD and -1 MOV for 2 chapters, indicated by the Bound stock effect.

If Binding Chains is used when other units are already Bound, the effect itself will not stack, but the duration of Bound will be refreshed.

Binding Chains is a unique Hyper that can be used for offensive and utility purposes. Binding Chains ensures that the player who activates it will be the only one to move during the chapter, acting as a 3 way

Dangerous Pudding against opponents. Thanks to its low cost, a player can potentially string more than one Binding Chains consecutively, barring other players from moving for more than one turn. In addition, opponents will lose a substantial amount of EVD and MOV for the following chapters, forcing them to rely on their DEF for survival and limiting their ability to flee.

There are numerous applications for Binding Chains. It can be used immediately before the MiracleMiracle
Every 5 Chapters, all

Double panels accordingly. This effect lasts for the duration of the Chapter. or SprintSprint
Every 6 Chapters, all players roll a base two dice for movement (up to 4 if using a card increasing your role). This effect lasts for the duration of the Chapter. event to deny everyone but the player the benefits of those events. The player should pay attention to the chapter count, however, since any players before the activation will still be able to move on the chapter when you using the Hyper. It can also help increase distance between oneself and a chasing player, close the gap between oneself and a target, delay the level up of opponents, or setup for an event such as a BomberBomber
Every 2 Chapters, place a visible bomb on a random panel. The bomb will explode within 1 to 4 Chapters, and units within 2 panels in a cross-shaped area of the bomb panel will take damage. explosion. It can be used to stall out effects like

Little War by skipping one of the opponent's precious buffed chapters.

The main disadvantage of the Binding Chains is that it doesn't bother most tank characters with high health and defense. While it does lower the opponents evasion stat for the time it is active, these characters do not use their evasion stat very often, usually relying on their high DEF to reduce damage. In the event that they do need to try and dodge, the evasion debuff is usually overkill due to the poor EVD these characters tend to have. The Hyper can also be essentially wasted if the player does not roll well during the chapter that it is activated.