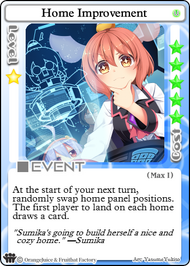 At the start of your next turn, randomly swap home panel positions. The first player to land on each home draws a card.
Level
1 ☆
Cost
5 ★
Limit
1 per Deck
Deck Points

Home Improvement is a collectible Event card that can be acquired from the Community Pack 3.

Home panel is shuffled. After homes are swapped, the first player to land on each

Home panel draws a card. This happens once for each home panel.

Home Improvement is a cheap card that can potentially change the flow of a game. Contrary to its name, Home Improvement is primarily used as a disruption card, to deny norma level up of a player in the lead, through swapping their

Home panel away from them.

Players who meet norma requirement can use Home Improvement to swap their home closer by, making it faster to achieve norma and secure a lead, while also potentially slowing opponents who were approaching home. If a player is low on HP, they can also use it to stop on their

For some characters, Home Improvement can be of more use in a deck. Bully characters such as Yuki and Star Breaker going for wins norma tend to skip stopping at home for their norma at norma level 3, to keep

Encounter panels from turning into

Boss panels, or when targeting an opponent for a KO. Thus, this card can be a great way to reclaim norma whenever it is skipped.

In certain circumstances, Home Improvement can also be used as an emergency method of drawing more cards, or forcing such on others. The most effective candidate for this sort of strategy is Merchant, who already benefits through landing on the home panels of other players thanks to him generating a

Freight card whenever he does so, making him harder to catch, overall more secure, and more potent with his hyper in hand. Moreover, as a unit who can hold a maximum of 4 cards, but with the terrible plight of 6 REC, Merchant will always appreciate even a single additional card option. In certain scenarios, it can act as a terrible inconvenience, however; Mei may intend on dumping her hand with a

Present Thief set on a home panel, only to not gain

Red & Blue thanks to her drawing a card immediately afterward. Store Manager is hit the hardest by the secondary effect, as he generally wants to avoid card draws in the first place, and having a hand that is constantly full will lead to him being forced to chip away at his own health pool.