100% Orange Juice Wiki
Register
Don't have an account?
Sign In
Advertisement
in: Level 1 cards, Battle cards, Base pack,
and 2 more 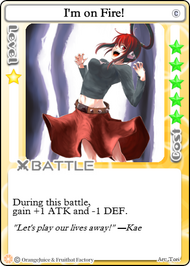 I'm on Fire! is a collectible Battle card that can be acquired from the Base Pack.

I'm on Fire! is a cheap, low norma battle card that enables the player to receive a small attack boost in combat for a small trade-off. With a gain of ATK by 1 and a decrease in DEF by 1, the card offers a relatively low-risk way for the player to boost their offensive abilities. Even with its simplistic nature, the card is not without a variety of uses. Possible uses for the card can vary depending on the player's situation and character.

At its most basic, I'm on Fire can be used to ensure a KO on a low-health opponent by providing an extra push to the player's attack roll. The card can also prove useful to bully characters such as Tomomo and Star Breaker, who already have an edge in combat from their stats. The addition of one more point of ATK will make them roll a 4 at lowest and a 9 at the highest, ideally KOing the opponent before they can take advantage of the decrease in defense. In particular, Kae and Nath can use I'm on Fire! to excellent effect, as it combines well with their passive effects. Kae receives a massive +2 ATK boost for a low cost and Nath can use it to start stacking active extension early in the game. Even lower attack characters and tanks, such as Marie Poppo or Fernet, can take advantage of the card for a small attack boost, as the character's large amount of health will help make up for the loss in defense. This should be done sparingly as a tactic to finish off an opponent or boss with 1 HP, as it is unlikely that these characters will KO a unit while their health is high, even with the ATK boost.

While a common card in most beginner decks, the player should evaluate the usefulness of I'm on Fire before adding it to their deck. The card itself is often ignored for its stronger relative

Big Magnum. The additional point of ATK it grants for a single point of health and 15 additional stars is a benefit that outweighs its cost to many players, though its norma 3 requirement does make it useless in the early game. In addition, I'm on Fire is difficult to make use of when the player is attacked, as the opponent will get to strike the player's reduced defenses before they have a chance to use the offensive boost. Characters with a high evade stat like Suguri can play around this downside, but also put themselves at risk by including this card in their deck. The attack boost I'm on Fire provides can make it harder to dodge their opponent's attacks if they get a hold of it.