I Wanna See You 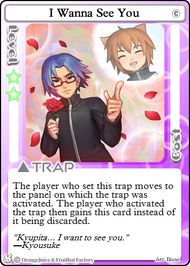 The player who set this trap moves to the panel on which the trap was activated. The player who activated the trap then gains this card instead of it being discarded.
Level
2 ☆
Cost
0 ★
Limit
3 per Deck
Deck Points

I Wanna See You is a collectible Trap card that can be acquired from the Pudding Pack.

Upon use, this Trap card is set on the player's current panel. When triggered, warps the player who set the card to the same panel as the affected unit. It is then added to the hand of whoever triggered it, making it usable again by its victim.

I Wanna See You is a tactical trap with a variety of potential uses for all play types. Firstly, as one of the only traps capable of transporting players, it is helpful to get bullies like Star Breaker within striking range of her targets. Once activated, it makes for a good combo with

Ambush for attackers seeking battle, or with

Treasure Thief for passive or defensive builds seeking cards or opposing Hypers. Across the board, it can be tentatively placed near home panels as an auxiliary form of

Leap Through Space, in an attempt at securing norma level more quickly.

Naturally, it sees the most usefulness in the hands of trap-layer builds, particularly Mira, Saki, and Yuki (Dangerous). Its early availability gives it placeholder value while the trap-setter seeks out higher value Trap cards like

Big Bang Bell. Since it transports the user, trap-layers can then place another trap on the panel later in the match, when they have access to higher norma traps. Yuki (Dangerous) especially appreciates this for the increased volume of wins gained through her passive. Her Hyper

Evil Mastermind, is conductive for drawing and/or placing I Wanna See You at random.

Since the card's strength lies in its tenacity through infinite recycling, its best counter is for an opponent to simply discard it.

Star-Blasting Light will destroy it until the deck is reshuffled. Players who want to remain as far away from their opponents as possible should avoid adding this card to the deck.