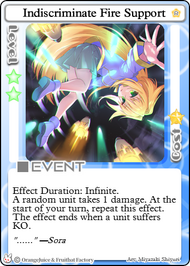 Effect Duration: Infinite.
A random unit takes 1 damage. At the start of your turn, repeat this effect. The effect ends when a unit suffers KO.
Level
2 ☆
Cost
10 ★
Limit
3 per Deck
Deck Points 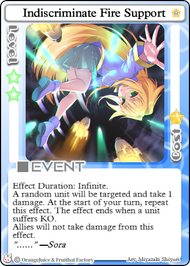 Effect Duration: Infinite.
A random unit will be targeted and take 1 damage. At the start of your turn, repeat this effect. The effect ends when a unit suffers KO.
Allies will not take damage from this effect.
Level
2 ☆
Cost
10 ★
Limit
3 per Deck
Deck Points

Indiscriminate Fire Support is a collectible Event card that can be obtained from the Pudding Pack.

When used, deals 1 damage to a random unit. The effect repeats at the start of the player's turn until a unit is KO'd.

Indiscriminate Fire Support is a great card for characters who want themselves or others to not be at full HP. For only 10 stars with a low level requirement, it is an effective tool for spreading damage throughout the match. Offensive characters with decent HP pools like Yuki or Kai can capitalize on players that have been injured by this card by taking them out in combat. Characters that gain advantages from low HP opponents can use this card to whittle down each player without having to fight them. For example, Natsumi's healing passive and hyper

Cooking Time can provide many more stars when all of her opponents are low on HP. Kiriko's high HP pool gives her an advantage against her opponents while Indiscriminate Fire Support is active. If she is lucky, it can also prepare multiple people to be KO'd with her hyper

Final Surgery. She can even use it to KO herself in a pinch rather than using her hyper.

Alternatively, Indiscriminate Fire Support should be avoided by players looking to keep their HP as high as possible. Characters with very low HP pools, like Robo Ball or Peat will quickly find their HP depleted if another player is not KO'd soon. Tanks like Fernet and Kyoko also need to be careful with this card, as it can pose a threat to their powerful survivability. Nanako fits into both categories, making this card particularly dangerous for her.