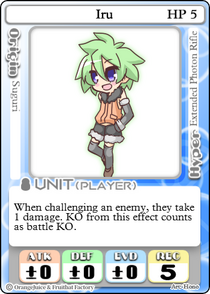 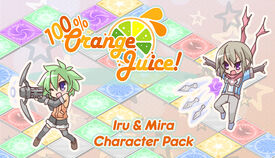 alongside Mira. Iru originates from the game SUGURI, in which she is one of the bosses.

Armed with a powerful photon rifle and tomboy-ish personality, Iru is a character built for bullying other characters by consistently dealing the first strike in combat. While lacking stat power, Iru's most notable and powerful trait is her passive ability that, similar to Ceoreparque, provides Iru with a rare "guaranteed damage" effect. When instigating a battle with another player, Iru automatically deals a single point of damage at the battle's start, before any dice are rolled or cards are played, and then gets to attack first. As one might expect, the primary advantages of this passive is twofold. When facing 1 HP opponents, Iru can essentially "snipe" them with the passive's guaranteed point of damage and receive the rewards of a usual battle victory with zero risk or effort. Likewise, when facing any opponent, the effect is still extremely beneficial as it grants a guaranteed extra point of damage which, in the case of low HP opponents, can be the difference between a KO or not. The passive is also particularly potent against tanks such as Fernet and Kyousuke, as relentless attacks can quickly chip away at their large HP pool at double the speed. Consequently, the effect is also more or less a hard counter to Kyoko, as her inability to evade Iru's second attack means a KO is guaranteed in 2 battles if not at full HP. On the other side of the spectrum, the passive is also useful on targets with inherently small supplies of HP such as Nanako and Peat which can be any easy source of wins if the player can keep entering combat with them and survive the counter attack. Boards with the Air RaidAir Raid
Every 5 Chapters, all units will take 1 damage at the beginning of the Chapter. effect can also be very useful in providing a constant flow of low HP opponents for Iru, assuming the air raid damage does not finish the opponent before Iru's passive can.

Despite the power of her passive, Iru has two key disadvantages; the first being that she is "too good" at one particular thing, at the detriment of having no other notable strengths. While Iru is excellent at sniping opponents at 1 HP, her key source of free victories is one that is often sought after, and hotly pursued, by other opponents. Playing against other characters that are good at securing KO's against low HP opponents can make it difficult for Iru to capitalize on the effect. The second and more obvious weakness is a more general unreliability with the rest of her kit. With neutral stats across the board and a random, often unreliable Hyper, Iru is a bit match-up dependent. Against tanks and characters with +1 or lower ATK, Iru should have a decent chance of success, but against +2 ATK opponents, her strike first strategy becomes somewhat of a game of rocket tag, as she is somewhat likely to take big damage in return. Lastly, given that Iru's passive does not work against

Boss panels, the player may need unconventional strategies in order to safely approach neutral enemies, as Iru's offensive capabilities when isolated from her talent are just average at best.