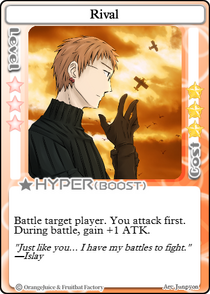 Despite the Hyper's animation, the player does not leave their panel at any point when using it.

Rival is an incredibly powerful Hyper that often makes up for Islay's negative passive - if she's able to draw it. Unlike passing by a player and choosing to fight, Rival gives Islay a lot more control over the game, allowing her to fight any non-KO'd player, regardless of their position on the board. Rival gives Islay the ability to wait until an opportune moment: primarily when the opponent is at low HP. Rival is fairly costly - whiffing it could be disastrous. Because of this, it's advised to mainly use Rival if the player would gain significant progress towards a win by, for example, gaining a large amount of stars off the KO (enough to offset the cost of Rival, and enough star profit to justify using).

Rival's only use case isn't just to get ahead, however. When the player is well in the lead, Rival can be used defensively, targeting and KO'ing (or weakening) a player attempting to stop them. Rival pairs nicely with Battle cards that further augment the +1 ATK, such as

Final Battle is another (albeit expensive) powerful option. Both Rival and Final Battle/Big Magnum can be reduced to 0 cost through use of

Though potent, Rival has some weakness. For one, it is telegraphed - opponents know when it is coming, unlike battle card Hypers, which can be a surprise in a battle. This gives players some leeway in shutting it down.

Shield Counter can end the battle entirely, and players can prepare for a big hit by usage of any defensive card. Rival is also very expensive at 30 stars, only offering +1 ATK for the cost. This may not be enough if the player using Rival needs to KO a 2 HP or higher opponent, who may roll high for defense, effectively wasting the card.