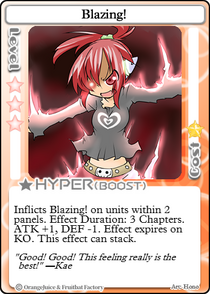 When used, the player as well as all non-KO'd units within a 2-panel radius will instantly gain 1 stack of Blazing!. This grants +1 ATK and -1 DEF for every stack. This effect lasts for 3 chapters, or until the unit is KO'd.

If Blazing! is used while it is already in effect, the effect will stack and the duration will be refreshed.

Blazing! is an extremely powerful high-risk Hyper that can be used to quickly deal massive damage to an opponent. The Hyper will give Kae a total boost of +2 ATK when the effect is active. Therefore, the effect essentially works like

I'm on Fire! except for 3 chapters and with a stackable effect. However, the effectiveness of stacking the Hyper begins to shrink after exceeding 3 stacks, as during battle Kae's ATK cannot exceed +9.

The card itself is best used when Kae attacks first and has a further reduced DEF stat to augment her ATK, creating a dangerous situation for the opponent. The Hyper is best used to finish off an opponent (or opponents) that Kae is trailing, in hopes that Kae will not risk being KO'd as a result of her low DEF stat. The player can also use the Hyper strategically to have an opponent within the effect's activation radius to lower their DEF.

As to be expected, the Hyper pairs very well with other damage-increasing cards such as

I'm on Fire!. With a single stack of Blazing! and

I'm on Fire!, Kae will already have a +6 ATK stat when attacking. Similar combos can also be made with

Rainbow-Colored Circle, with the latter providing Kae the opportunity to evade damage and deal a second wave of damage.

The main disadvantage to Blazing! is that it leaves Kae vulnerable with a poor DEF stat. If an opponent with high ATK is trailing Kae, they may be able to take advantage of her weak defenses during this time. Further, the opponent may also have an increased ATK if they were within the activation area of the Hyper.