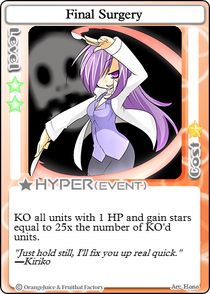 Kiriko's Hyper is Final Surgery. When used, it will instantly KO all units whose current HP is 1. This can also affect the player. The player gains 25 stars for every unit KO'd by this effect.

Final Surgery is an overall powerful Hyper that can both KO the opponent and player and provides stars, like a cheaper improved version of

Air Strike. From level 2 onward, the player will be able to use the card to KO opponents and themself if the situation presents itself. Due to its cheap price, the player will always gain at least 15 stars and 90 at most. However, the Hyper should generally be used to KO Kiriko when her HP is depleted, in order to restore it back to full without losing stars.

The Hyper itself is best used with combos such as

Sealed Guardian, with the later, while rare, enabling Kiriko to KO everyone for a gain of 100 stars. Final Surgery can also be used as a deterrent and counter against other characters and combos. For instance, Syura will be at a large disadvantage as her Hyper and passive rely on being at 1 HP. Star Breaker will also have difficulty using her Hyper as it will run the risk of providing Kiriko with free bait for Final Surgery.

The main downside of the Final Surgery is that it is a situational Hyper. If the player is particularly unlucky, the opportunity may never arise to use the card if Kiriko and other opponents are consistently KO'd successfully without reaching an HP stat of 1. The Hyper is also susceptible to

Play of the Gods, as it is an event card, meaning other players may be able to profit from it and KO themselves as Kiriko normally would.