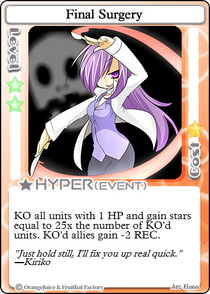 In Co-op mode, Kiriko's stats and passive do not change.

Kiriko's Hyper, Final Surgery, has a slightly different effect in Co-op. In addition to its normal effect, the Hyper will grant the Final Surgery stock effect to every player KO'd by the Hyper's effect. The stock effect grants -2 REC and is removed when the affected unit is revived. The Hyper otherwise functions similarly to its Normal mode counterpart.

Kiriko's passive and Hyper are unchanged in Bounty Hunt mode.

Kiriko's base stats give her 32 starting stars and a markup of +20% at shops.